The 2015 Algarve Property Market Report: Analysis for the UK Investor

The number of UK residents interested in buying a holiday or retirement home overseas has increased dramatically over the past year. The most popular countries of interest remain France, Spain and Portugal.

To gain insight into which of these countries holds the best potential for both value and investment, Meravista.com has conducted a property market analysis of France and Spain against the Algarve region of Portugal. The results show that the Algarve is the better choice in both regards for the year 2015. 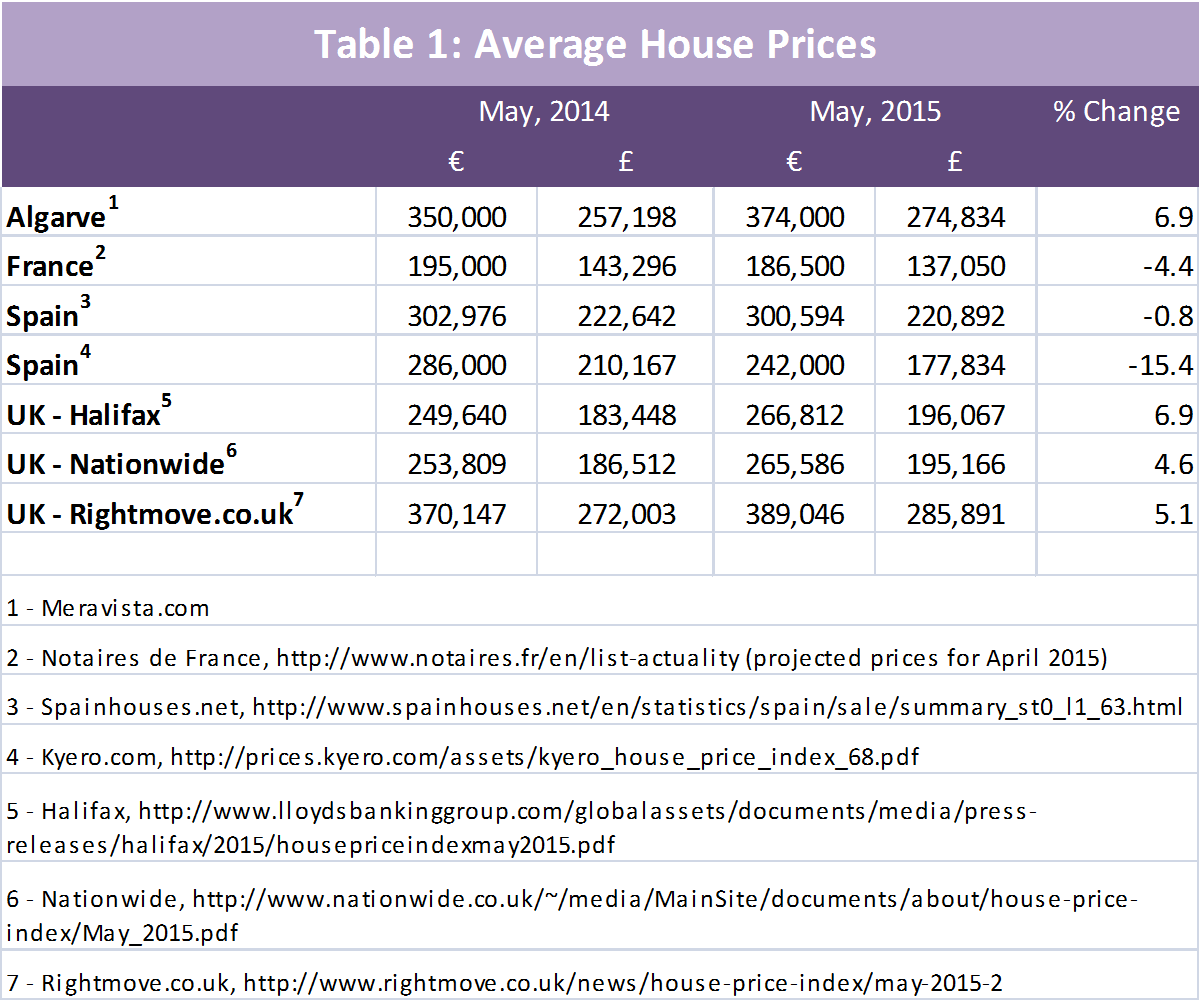 Right off the bat it doesn’t look too good for the Algarve. Meravista.com, the world’s largest property portal devoted exclusively to the Algarve, reports that from its database of 24,000 Algarve properties the average house price is £274,834 (€374,000) for 2015.

Even the vaunted UK housing market is cheaper depending on who you want to believe:

At first glance France is the clear winner with an average house price of £137,050 (€186,500), so we should all don our berets and storm the beaches of Normandy.

However, facts can be so misleading. 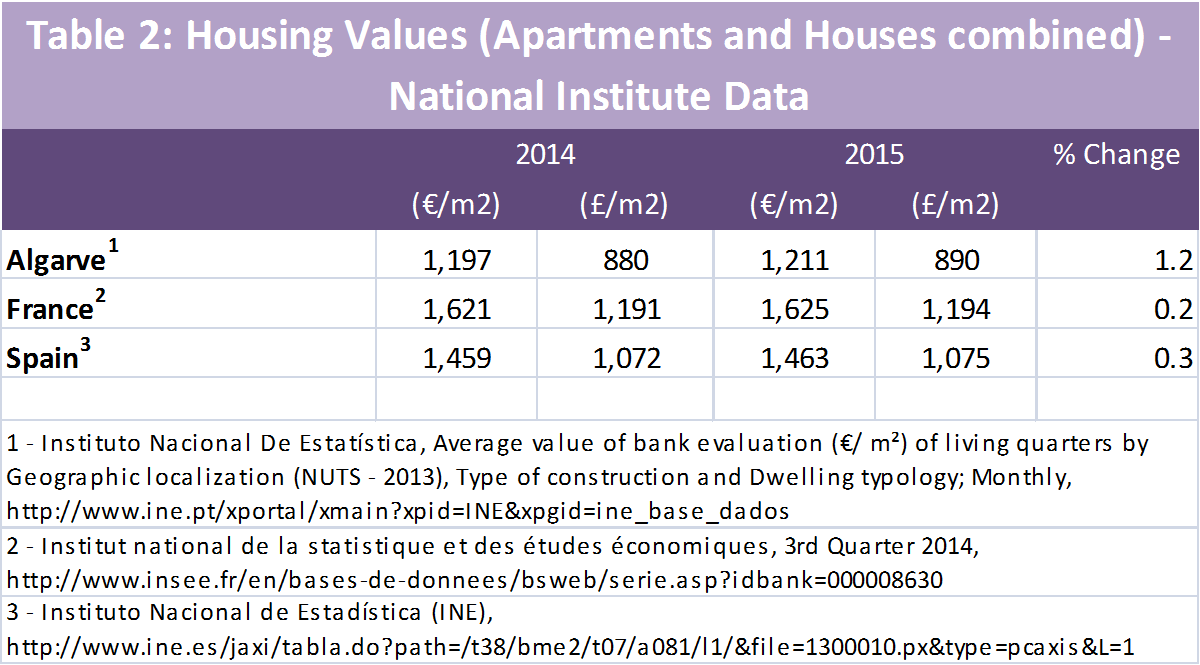 Algarve favourability becomes clearer when you look at housing values. Housing values are calculated at price per square meter and give a greater idea of how much you are getting for your money.

Each country has its own national institute of statistics that calculate the bank valuations or new construction costs of dwellings (both apartments and houses). For 2015 the Algarve, at 890£/m2 (€1,211), is much lower than France or Spain. 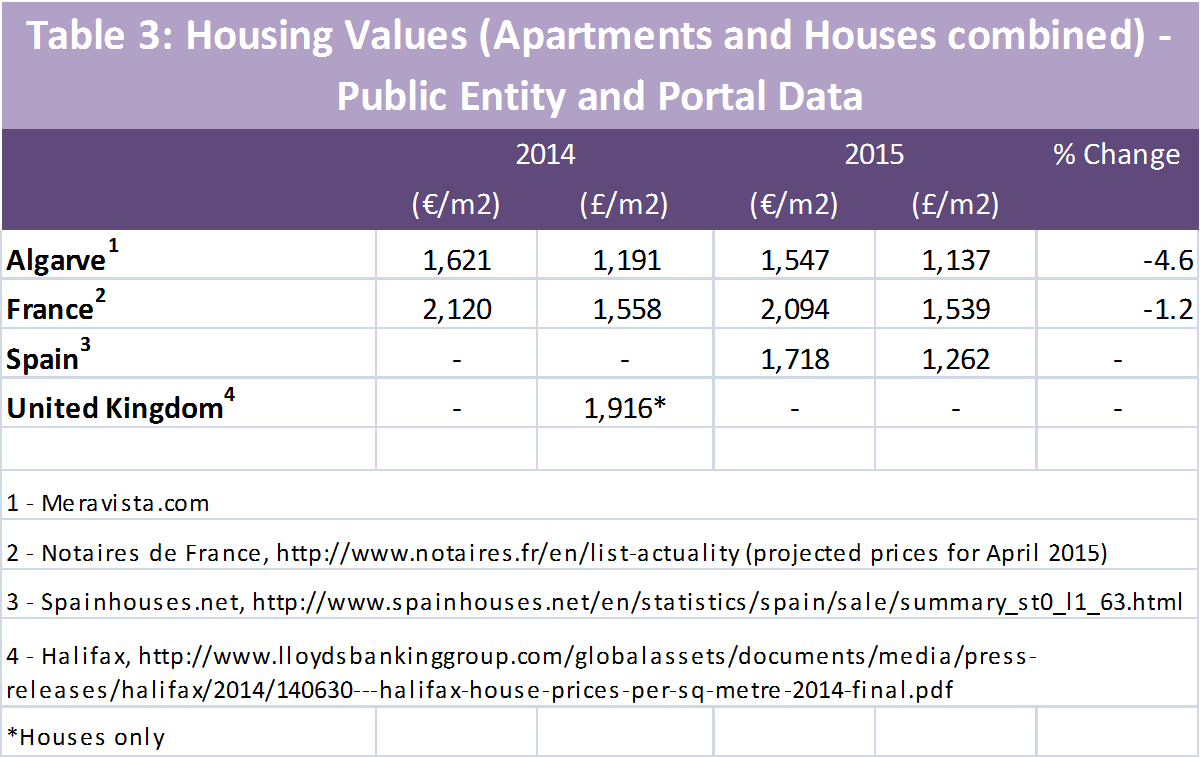 This is reinforced by publicly derived retail housing values from portals like Meravista.com and other entities. The retail housing value for the Algarve in 2015 is calculated to be 1,137£/m2 (€1,547) which, again, is much lower than Spain or France.  Compared to Halifax’s 2014 report on the average house value for the UK of 1,916£/m2, it makes perfect sense to flee the UK as soon as possible.

Housing values are important because they clearly show that you are getting more house for much less money in the Algarve than in the either France, Spain or the UK. It also informs the investor that even though the average retail house prices in Spain, France and the UK may be lower than the Algarve’s, those average houses are much smaller and costlier than their Algarve counterparts. Whether you want a bolt hole or a mansion, you will get more of each for your money in the Algarve.

Algarve Property as an Investment

The OECD (Organisation for Economic Cooperation and Development) says that the economies of France, Spain, and Portugal are recovering in 2015. Yet France’s and Spain’s housing prices are still in freefall. The OECD relates that Spain still has an excess of housing in coastal resorts and satellite towns which will likely continue to drag down prices there until they can be taken off the market. In France, the Notaries de France project that house prices will continue to fall because there is simply no observable confidence in the French housing market at this time and in the foreseeable future.

In contrast, the Algarve’s housing prices have risen steadily over the last year. The Eurostat House Price Index shows that Portugal has recovered 92% of its housing value since 2010, whereas Spain has stagnated at 72% - the lowest in Europe.

With no reasonable expectation of seeing any gains in France or Spain in the near future, the Algarve is the better choice for investment.

Incentives for Buying and Living in the Algarve

Moving to Portugal has several economic advantages. The 2009 Personal Income Tax regime of Portugal allows for those registering as non-habitual residents of Portugal: a 20% taxation on income if you choose to find certain employment in Portugal; or no taxation at all if you continue to derive income from sources outside of Portugal.

The news for UK pensioners is even better. The new pension freedoms in the UK allow you to withdraw your entire pension if you so wish. Under the Portugal regime, as a non-habitual resident, you can withdraw that pension and avoid the 55% UK tax on it. Due to the double tax treaty Portugal has with the UK, your pension withdrawal will be tax free for the first ten years and then, after that, taxed at Portugal’s marginal rates, not the UK’s rates.

Now is also a good time for clearing your pension Pounds into Euros. Currency exchange expert Emma Bullock of GCEN (General Currency Exchange Network) says: “Clients are getting a great exchange rate at the moment and are enjoying over 10% more from their Pound than they did this time last year. But remember as house prices start to increase the gap between the house price and exchange rate will grow narrower.” In other words, now may be a good time to buy Algarve property. 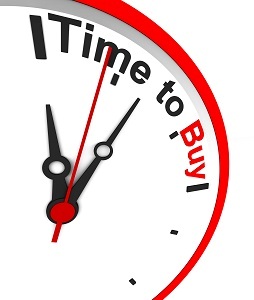 With your money free and clear, buying a home in the Algarve has also become easier and less expensive. For 2015, Banco de Portugal has stated that because of the general positive outlook for Portugal’s economy, most lending institutions have eased restrictions on granting home loans.

Algarve estate agent Richard Mills of Azul Homes confirms: “Banks are lending more freely than in the past two years, especially Santander. Even offshore-held properties are being financed again after an extended hiatus.”

As far as mortgage rates are concerned, Portugal is tied to the Euribor which is fast approaching negative territory. In Portugal, interest rates on most mortgages are linked to a monthly average of three- and six-month Euribor. The current three month Euribor rate is already in the rarified area of negative interest at -0.015% . With a typical 2 point spread, a monthly mortgage payment these days could be the lowest it has been in quite a long time.

2015 appears to a pivotal year for UK investors in regards to obtaining Algarve property. Market forces clearly indicate investment in this region while the prices are at the beginning of their upward trend.

Bookmark/Share this post with
More Popular Articles:
Property in Aljezur – the rugged and peaceful west
Lagos - Modern Town in the West
Property in Olhão - the Algarve's best bargain
3 simple steps to buying property in Portugal