Naturist beaches in the Algarve 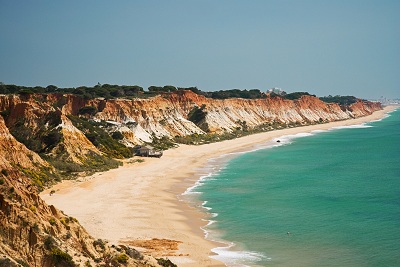 With over 150 kms of coastline, the Algarve is famous for its stunning beaches with expanses of smooth soft sand and plenty of sunshine all year round. If you like to get an all-over tan without resorting to spray or lamps, you can enjoy the Algarve's three official beaches dedicated especially for naturists.

This is one of the sandy islands that form the cordon separating the Ria Formosa estuary from the Atlantic. At 18kms long, Barrill beach is huge, pristine clean and with calm and warm waters.

Ferries run from Tavira to the island, or you can take the footbridge and wooden pathways from the village of Santa Luzia. To get to the nudist beach it is best to take the small train that crosses the Ria Formosa from Pedras D’el Rei, slightly to the west of Tavira. The naturist beach is to the west when alighting from the train and is called Praia do Homem Nu (The beach of the naked man)!

South of Faro, just off the coast of Olhão, you’ll find the aptly named Ilha Deserta (Deserted Island). The least developed of the three islands that surround the Rio Formosa national park, it was declared an official naturist beach in 2011. Quiet and peaceful, this is the beach to head for if you want to escape.

On Odeceixe beach you will see some large rocks, behind which is a small cove at the southern end of the beach; this is Adegas beach. The beach can be accessed from Odeceixe beach at low tide or from a footpath leading to the cove from the cliff top. 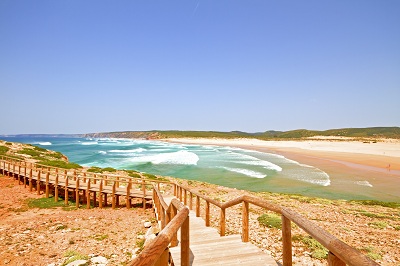 In addition there are some beautiful unofficial Algarve nudist beaches: 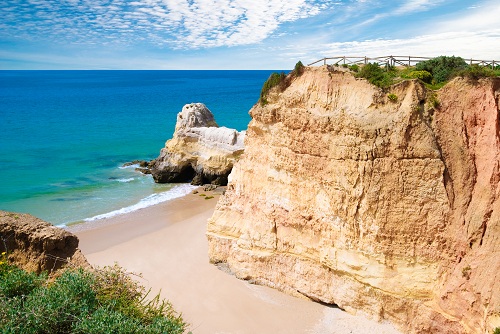 With so many sheltered coves offering complete privacy it is possible to find your own secluded spot where you will probably not see another soul. Topless sunbathing is permitted on all beaches although it is mainly the tourists and not the local ladies who practice this.

You can find all these beaches and more in Meravista Blue Flag Beach list, which you can print or download as a handy reference.

The climate is wonderful: sun shine averages over 300 days of the year, with daytime temperatures in winter ranging from 15 to 27 degrees. The temperatures in the summer can reach as high as 40 degrees so always make sure you have plenty of high factor sun lotion on hand.

For more information on Naturism in the Algarve, you can check the Federacão Portuguesa de Naturismo (Portuguese Federation of Naturism)  and the Clube Naturista Algarve (Algarve Naturist Club).

If you're a naturist, Portugal is a very welcoming place.  Make it permanent when you buy property in the Algarve!