The special charm of the Algarve storks

Legend has it that in the old days in Portugal, it was considered very bad luck to kill a stork. The punishment, 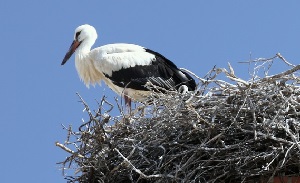 so the story goes, is that an offender had his hand chopped off. Now that really is bad luck. Ancient Thessaly, a region found in modern Greece, originally implemented the death penalty for anybody killing a stork; even worse luck.

For many years the stork has been a protected species worldwide. In Portugal they are almost revered. Unfortunately, these beautiful creatures migrate from southern Europe to the Near East and Africa where, despite still being protected under law, many countries do not enforce the law, or they implement very light penalties, that do little to deter hunters. Much illegal killing of storks and other protected species still takes place when these birds migrate.

Portuguese farmers appreciate and protect storks because the birds thrive on small mammals, lizards, snakes and large insects, which save the farmers having to use expensive pesticides on their crops. This in turn protects the bees that pollinate the crops for better harvests, as well as providing valuable honey and by-products produced from bees wax. Storks often build their nests close to marshlands or wetlands, where they can feast on frogs and fish too. 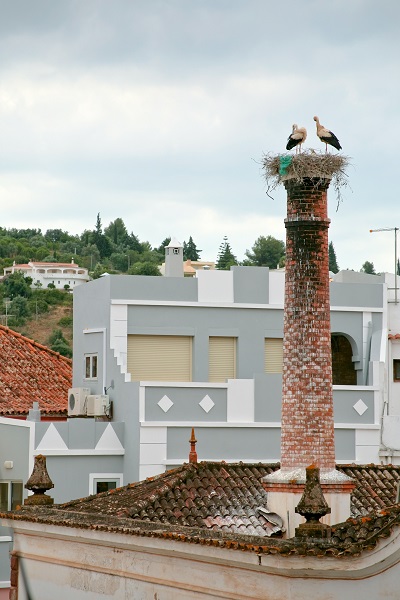 steeples. These huge creations are an incredible feat of engineering and balance, and it’s a wonder how such large birds can raise their families in them without toppling down to earth. They return to their nests each year and it’s not unusual to see a series of nests on pylon poles, where the offspring have chosen to build close to their birth nest. If you’ve ever wondered why you see so many ancient commercial chimneys still standing tall in areas that have been demolished and /or redeveloped, it’s because it’s against the law in Portugal to demolish or disturb a stork’s nest. Some property owners in the Algarve are surprised to suddenly discover new neighbours atop their high roof - a sign of good luck!

Storks are monogamous birds on the whole and they divvy up their parenting duties equally. The female lays her eggs in March or April; stork eggs take approximately 5 weeks to hatch. Once the chicks have hatched, both the male and female take turns in foraging food for their new family and they share the responsibility of raising them safely. The stork has no vocal chords and, therefore, its sole means of communication is clacking its beak. The noise of the “chatting” is heard for quite some distance, especially in the mating season and whilst raising their young.

There’s a wonderful story of a pair nesting on the tall chimney on the road from Faro to São Brás who never produced a baby. One day the male disappeared and the female went into a decline, to the point where she was taken to a bird sanctuary to help her recover.  When she was deemed well enough, she was released back to her nest, to find the male had returned. Not long afterwards they had their first offspring and lived happily ever after. Incidentally the nest is still there and is regularly filled with babies.

Many Algarvean storks migrate to Africa for the winter months and the skies above Sagres are filled with thousands of storks gliding on thermals until they suddenly take off, as one, to warmer climes. Watching these big birds with their huge wing spans soaring in the skies above is a fantastic sight and it’s quite amazing how they all take flight at once. Have you witnessed the incredible sight of a flock of storks?

If you’re interested in birds, then don’t miss the big annual Bird Watching Festival in Sagres. It’s usually held in October so look out on our blog for details.

Bookmark/Share this post with
More Popular Articles:
The history and use of cork in the Algarve
Bird watching in the Algarve
Explore the Ria Formosa
Algarve animal sanctuaries